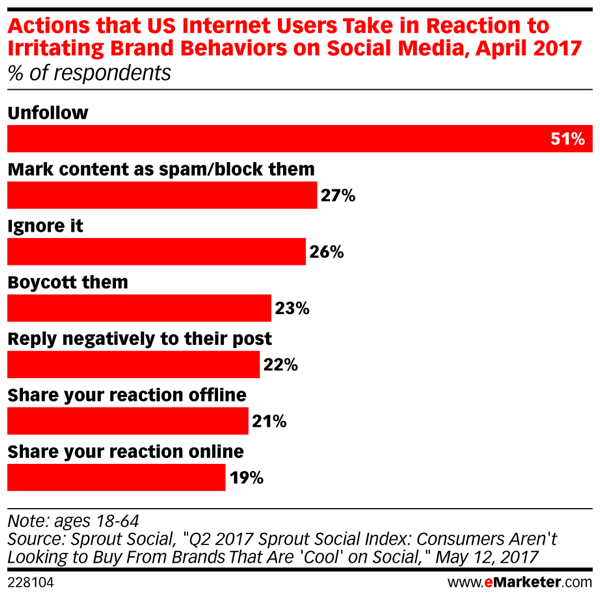 Social media is an incredible way to connect with your audience across the world seamlessly and instantly. But just as quickly as a post can reach the other side of the world the unfollow button can also be hit. Once someone unfollows your brand’s account that prized connection is lost.

Consumers hold all of the power in your relationship, and you really, really don’t want to annoy them. However, chances are your brand is naively committing a few social media crimes that may tempt your audience to unfollow you. Here are a few of the most irritating behaviors a brand can engage in on social media – be sure to avoid them all!

Using Slang and Hopping on Trends

Remember when your mother would say “Well, just because Tommy did it doesn’t mean you should?” Yep, that applies to social media too. It may be tempting to join in on popular words, phrases or even viral social behaviors, but be sure to stick to your brand and do your research first.

In 2014, DiGiorno pizza made a big social media blunder which joined in on the #WhyIStayed” hashtag – a hashtag that was in response to the decision of Ray Rice’s wife to stay with the NFL player after he committed domestic violence.

Without understanding the origin of the hashtag they used it to sell frozen pizza. Yikes. They, of course, apologized for their error and admitted they didn’t know what the hashtag was about. Moral of the story? Only jump on trends you fully understand.

Additionally, don’t use slang that doesn’t suit your brand. You carefully established a brand voice for a reason – to appeal to your target audience. Speaking like a 17-year-old college student when your business sells homeowner’s insurance doesn’t make sense. It’s confusing and, well, annoying.

Excessive Use of Hashtags

Hashtags are a great way to reach a greater audience and increase engagement, but there can be also too much of a good thing( if you’re interested in how to find the perfect hashtag you can read a bit more here). Sure, after gathering brand hashtags, popular hashtags, niche hashtags, and broad hashtags your list can become #overwhelming very quick. This is why it’s very important to test out which work best for your brand and utilize powerful ones the most.

In a recent study on the optimal amount of hashtags TrackMaven analyzed over 65,000 social media posts to discover the best number of hashtags to use on various platforms:

It’s also important to note that you should be using effective hashtags only. If a word isn’t directly relevant to your brand, services or message, don’t hashtag it! Consider the following sets of tweet copy:

WRONG: Revealed: #Fitness #Secrets that every woman #needs to know.

RIGHT: Revealed: #Fitness secrets that every woman needs to know.

Not only is the wrong option annoying to read, but it’s also confusing to understand the message of the tweet.

Via Our Social Times 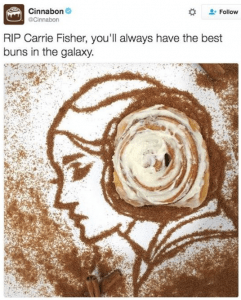 Yes, your goal on social media is to sell your business’ brand or service. However, it still shouldn’t be all about you. No one likes to scroll through a Facebook page and see 20 posts in a row that advertise a service or encourage you to buy a product.

Social Media Marketing Pro Tip- A good rule to follow is the 80/20 rule – 80% of the posts your share should be brand-centric about your brand, 20% of the time curate articles, photos and videos from other sources and make sure they are quality and shareworthy.

Take Cinnabon, for example. After the death of Carrie Fisher they published a tweet mourning her death, but still included product placement. They received a great deal of backlash (some calling it “tasteless”) for doing so and ultimately issued an apology and deleted the tweet.

Every business has to do some kind of reputation management and monitoring and here is the lesson learned. If your brand is ever faced with having to issue an apology for a social media post, note that it is always best to simply apologize. Do not try to pass blame on programs, platforms or specific people like the Patriots did. A good apology accepts responsibility, doesn’t make excuses, commits to being better and acknowledges why the post was not received well and shows care.

Pro social media marketing tip- Even a bad review can turn positive when replied to responsibly and correcting the issue if possible, people read replies and this shows active participation in customer care.

Consistently misleading your audience is a poor way to convert them into loyal customers and alienating them for good! Yes, clicks are important, but you want clicks that matter (i.e ones that are the beginning steps for forming a valuable relationship).

There is a fine line between intriguing copy and teasing people. Give people a sample of what they will learn if they click. Don’t promise to reveal Prince Harry’s “biggest” secret when in reality you’re just sharing that he eats peanut butter and pickle sandwiches. 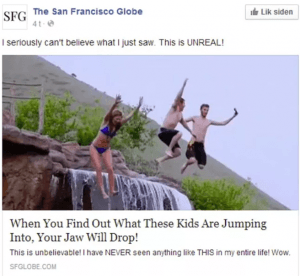 Posting obsessively and too often-Find a balance

So how often should you post on social media and what are the best times to post?

Even if each post is well thought out, contains quality copy and images, the right hashtags and is of interest to your audience – it can still feel like spam. A good rule of thumb is to post on Facebook twice per day, Twitter 3 times per day, Instagram once per day and LinkedIn once per day.  If you feel as though you are not getting all of the content you have planned published, try utilizing some of each platform’s other features such as Instagram and Facebook stories. This allows you to post without really posting. 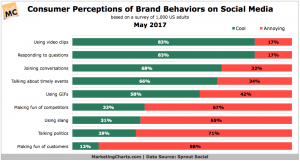 If your brand has committed a few of the above behaviors – don’t panic just yet! They’re all easy to fix and trust can be rebuilt with your followers. Take into consideration what you’ve learned and develop a new social strategy that attract people to hit the follow button again and again!