It’s 2019 – and social media live event coverage is everything! It’s a chance to utilize social media to show off your business’ event, product or service in real-time with highly engaging visuals. Marketers know the importance of live event coverage. Everything from sporting events to cooking shows is streamed on TV for millions of users to watch. However, you don’t have to have a massive wallet and a production budget to cover an event online! All you need is a phone, a few social media accounts and fast fingers (have you ever tried live-tweeting a NASCAR race?!). Here is how we regularly utilize live event coverage to help clients connect and engage with their audience at a wide variety of events you can also check out Facebook live coverage in depth in one of my posts titled 8 reasons why brands should be using facebook live.

There is no better way to cover an event on social media than to live stream it. A Facebook or Instagram Live is a small business’ version of the Super Bowl, Victoria’s Secret Fashion Show, Met Gala, and Grammys. It is their chance to broadcast their event to devoted followers and customers near and far. It’s very simple to implement, too! All you need is a phone, a strong wifi connection, a short and sweet caption that details what the event is (be sure to tag the location, too), and you’re ready to go. It not only gives those who couldn’t attend the event a chance to see what happened, but it also is an excellent marketing tool. For example, Social Motto covered Eastern Market’s Flower Day in 2017 and shared a Facebook Live to help document the day. In one 42 second video, we were able to…

Facebook and Instagram Live also gives users a chance to answer questions regarding the event that need an immediate answer such as “How much are flowers?”, “What time is Flower Day over?” And “Where can we park?”. By answering these common questions in the comments, you can help alleviate confusion and facilitate a more successful event.

There is still plenty of time and plenty of flowers at #EasternMarket Flower Day!

Posted by Eastern Market Partnership on Sunday, May 21, 2017

When advertising the event, it’s important to include a branded hashtag that is specific to the event. All posts regarding the event should include that consistently, and it’s helpful to encourage users to share their photos with that hashtag at the event, too. Why is this important? Well, hashtag tracking is an excellent tool to not only interact with your audience and collect user generated content (photos, videos, and quotes that people upload), but also for high-quality lead generation.

For example, let’s pretend Social Motto was hosting a massive pizza party for the entire city of Detroit at Little Caesars Arena. In the weeks leading up the event, we used #SocialMottoPizzaParty in the copy and also had signs at the arena telling users to upload their photos, videos and Instagram Stories using that hashtag. Now, let’s pretend Social Motto was searching for a few brand ambassadors or “influencers” to help promote our business. By tracking hashtags at the event, we could search for users who….

This is extremely helpful because not only is it a great way to find leads that are qualified, but it also helps you find leads that are direct followers of your brand and are interested in the events that you put on. Hashtag tracking truly can bring leads to you!

Geofilters are a great way to give attendees at an event the chance to be apart of the story. When they are on Instagram Stories or Snapchat, an option for a geofilter created just for your event will pop up. It can be a high-tech filter that alters the photo or simply just a frame with the event’s name around it. Not only does this do a great job at enticing people to post Instagram Stories and Snapchats live from your event, but it also makes it easy for you to share user-generated content. Everything is already on-brand, aesthetically pleasing and has the name of the event. Get ready for a massive boost of engagement! People love nothing more than seeing their carefully crafted content recognized and shared by their favorite brands at events. It truly lets them be apart of the story.

A tactic we use at Social Motto when live-tweeting an event is to thread the tweets by replying to the previous one with an update. When users see your tweets in their timeline, it links them and allows people to catch up and read your tweets as if it is a play by play or a story. Be sure to include photos, videos, and hashtags in these tweets. The more visuals, the better!

But what should you tweet about at an event? Well, everything! Here are a few examples of how live-tweeting can bring an event to life on Twitter…

As you can see, it’s really possible to bring a wide variety of events to life by live tweeting. It’s like writing a book in real time. The more detailed, the better. Just don’t forget to gently encourage engagement!

Covering a massive event by yourself on social media can be daunting. We encourage you to bring in as many employees as possible and ask them to share photos of the activities they are participating in at various events, too! For example, if Social Motto were to cover a taco truck event in Detroit, it could be helpful to encourage employees to all upload photos of the various tacos they are trying and to tag the business name on Twitter, Facebook, and Instagram. Then, those posts can be retweeted, shared and reposted across all accounts – allowing people to see a much more varied sample of photos and testimonials.

This is also helpful because people trust people. A tweet from a Karen Smith saying how delicious her taco from Taco Stand A is will hold a much greater impact than a tweet from the event owner saying Taco Stand A makes great tacos. Of course, the owner is saying that- it’s his/her event! But an average Joe saying that…it’s very valuable.

Last but certainly not least – PROMOTE! How will anyone know you are going to be going live on Facebook on Tuesday or live-tweeting a baseball game on Wednesday if you don’t tell them ahead of time?
We recommend advertising the social media coverage (and the event itself) at least two weeks ahead of time, with one final push the day before and an hour or two before on the day of. When advertising big events for our clients, we like to include countdowns to add a sense of urgency to get ready and buy tickets. It’s helpful for people to specifically know how much time they have before an event or live-tweeting coverage kicks off. Always remember to include dates, not “todays” or “tomorrows”. Posts can sometimes appear in feeds out of order. 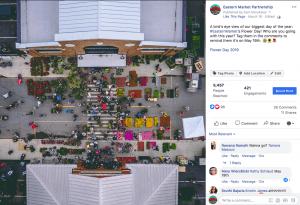