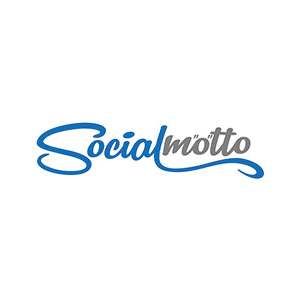 When it comes to social commerce, social networks, social channels, and social media networks things may all appear to be the same but can be quite different for your brand and sales channel to drive the right kind of audience to the targeted landing page.

With the sheer number of social media platforms multiplying each year, it can be difficult to find a social commerce strategy that can leverage each to success, driving customers with your social media efforts from social channels and through the purchase process.

Social commerce is the use of networking and branding through marketing and micro influencers on Facebook, Pinterest, Instagram, through a social network to buy or sell a product. Social media strategy is the tactics brands will leverage through campaigns on a social network to drive traffic through the purchase funnel to a landing page to the buy button. For example, a brand can use a technology platform that supports social proof as a social media strategy for social commerce to grow sales, engage, and connect with audiences to build brand confidence and drive customers.

The three top questions that we get asked:

In this guide, we breakdown exactly what social commerce is, how you can take advantage of it, and why it is essential to the future of your business.

What Can You Do On Each Platform?

Without a doubt, the three social media sites that are vastly ahead of their competition that we love the most are Instagram, Facebook, and Pinterest. These platforms not only make it easy for you to use their native shopping tools but also encourage their passive users to convert into paying customers in several different ways and are great for customer service through live chat features such as Facebook messenger.

Facebook is the oldest social media platform on this list. Even so, it is constantly innovating new ways to drive consumer interaction and improve user experience. Examples of these services include Facebook Marketplace, Facebook Messenger, original shows, and popular videos through Facebook Watch and Facebook live. Facebook is known for being data-driven and observing user behavior to reach conclusions and strengthen its brand. In particular, Facebook’s social commerce functionalities and marketplace are one area that this company has invested in heavily. 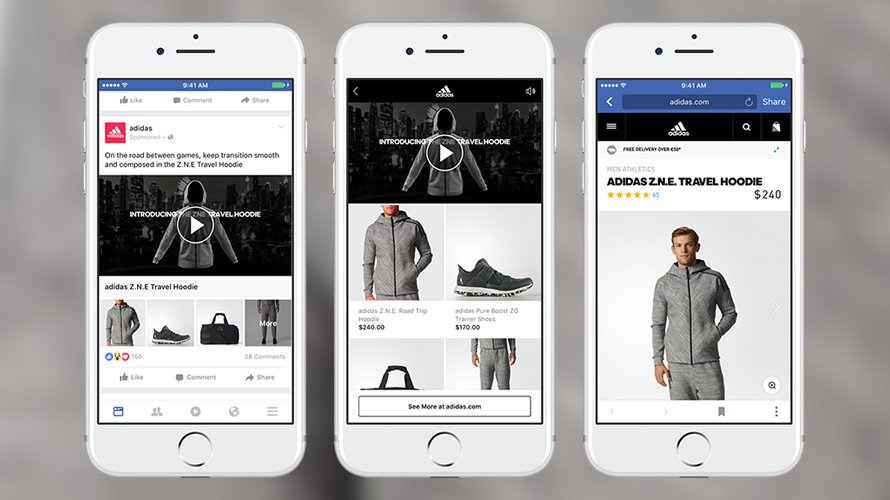 Instagram is the sister platform of Facebook. Instagram is generally accepted as the trendier platform, catering to millennials and younger audiences. This social media platform focuses on photography and videography. This makes it an excellent place to advertise physical products for the short attention spanned audience. 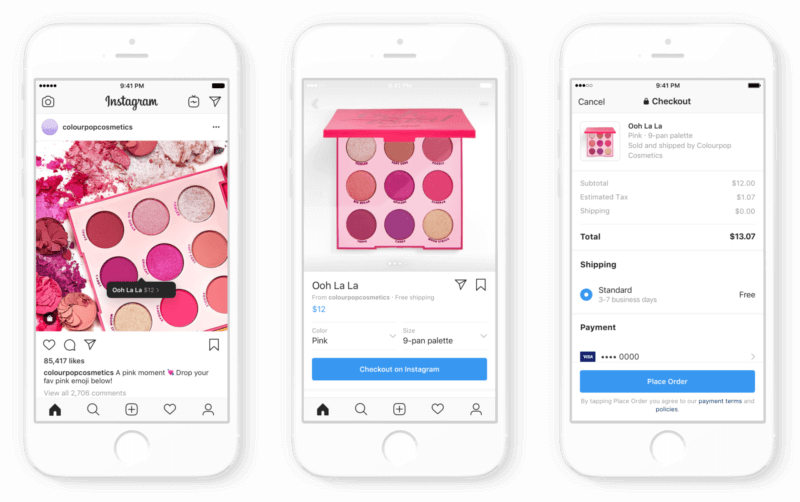 Here is a handy list of Pinterest’s social commerce functionalities. 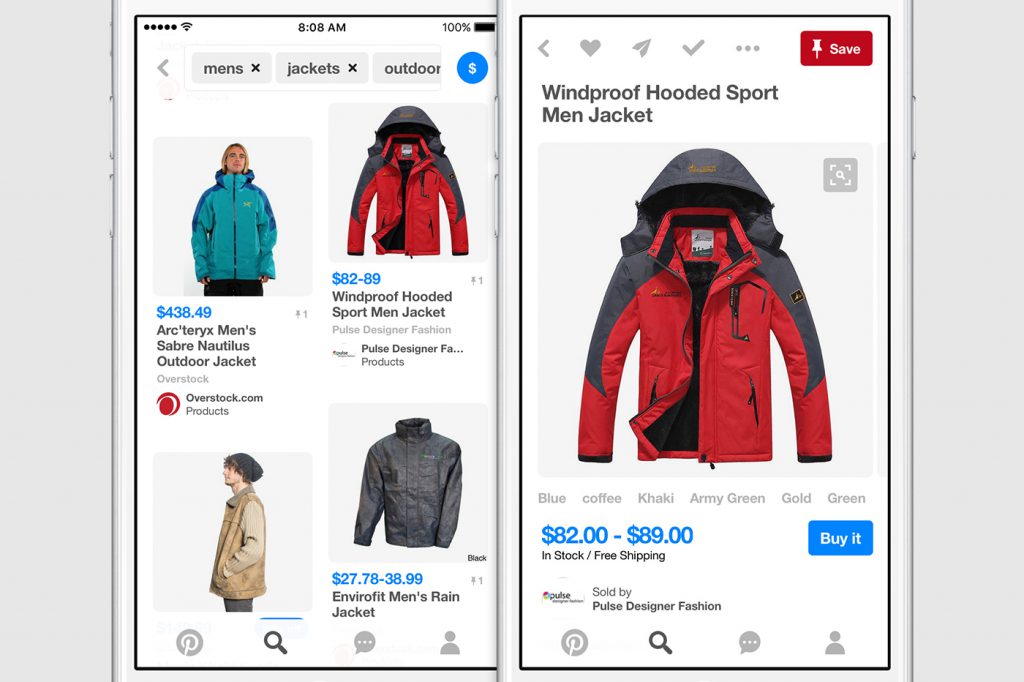 Why Is Social Commerce So Popular?

In-person shopping is an inherently social activity that combines utility with leisure. Even so, social commerce is a rapidly exploding field. What accounts for this explosive growth in the face of traditional conceptions of shopping?

What truly sets this field apart from its competitors is its contextual relevance. Why is this product irresistible? Who is promoting this product? How popular is this product? What group of people are using this product? All of these questions are easily answered when a product is found through social media. Humans are inherently social creatures, and these built-in tendencies reflect themselves in our shopping choices.

In short, consumers are deeply affected by the status quo and what is currently trendy. Social media more or less dictates what brands or styles are trending in today’s society, and social commerce is the logical extrapolation of this trend.

Why You Should Care?

The customers on these social media platforms are actively looking to purchase products. A staggering 74% of consumers were influenced to purchase a product after seeing it on social media. When a user sees a provocative Instagram video that centers around a new cell phone case, they may be tempted to check out the price and product description. If that information is easily available, it raises the likelihood that this interest will lead to an actual sale. If not, they will likely find the video amusing and continue scrolling until they find one or more products that they can learn more about.

In an ever-evolving world centered around social media and social strength, not pursuing social commerce could be a grave mistake. If your product is already going to be featured on social media, you may as well take one extra step and set up your social media shopping experience to improve sales. Take advantage of the fact that there are built-in shopping functionalities that make it easier than ever to connect with your consumers, and watch your business grow!

How can B2B Leverage Social Commerce? 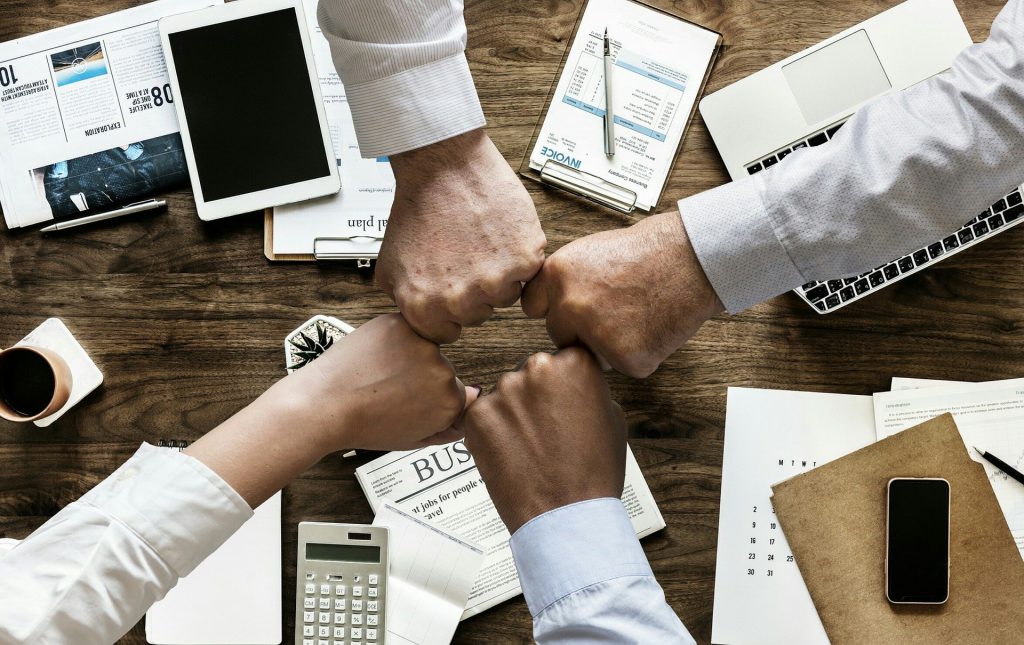 Social commerce is an additional step that can be added to your marketing strategies to create a more robust system overall. Brands’ identities are especially important for B2B marketing, given that businesses are not as easily swayed by impulse purchases as individual consumers are.

Through social media, you can legitimize yourself through a combination of shoppable posts and posts that provide free value or advice to your audience. You can craft a powerful narrative by surrounding your brand with daily posts. Shoppable posts in particular will incentivize your customers to try out your product.

How is eCommerce Related to Social Commerce?

eCommerce is the same as traditional commerce, but with all steps of a transaction taking place on the internet. The revolutionary step in the development of eCommerce was running email campaigns and collecting customers’ email addresses to cultivate customer loyalty. Through the additional sales channel of the email address, businesses could reach consumers more efficiently than ever before.

The Benefits of eCommerce:

The Benefits of Social Commerce:

Social commerce is in some ways the successor of eCommerce. It has many of the advantages that come with eCommerce. It is also even more intuitive for consumers. Rather than just using an email address, this strategy gets consumers to follow or subscribe to your products so that you can interact with them more in the future.

The Drawbacks of eCommerce and Social Commerce:

Overall, if you are a tech-savvy individual who understands social media, it can be very lucrative to get into the social commerce space. However, you may be more old-fashioned and prefer physical stores. In this case, it may be difficult for you to use the full functionality and scalability of social commerce brands. Hiring an external consultant may be the best move to enter the social commerce sphere.

Are People Buying on Social Media? 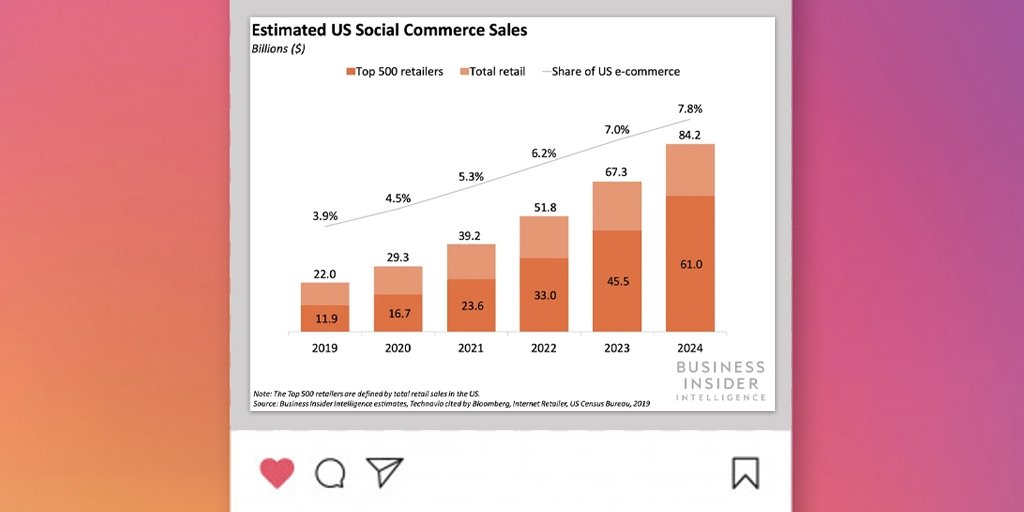 Social media continues to blur the lines between your virtual and physical identity. In the past few years, we have seen a large shift in consumer activities. This shift is particularly visible in spending patterns. In 2017 the top 500 retailers reported revenue of over $6.5 billion from social shopping. This is a 24% increase from the year before. Each year from social media’s inception, there has been an increase in how much money is spent through social media. With billions of dollars being put into social platforms by consumers, the time to capitalize on your social commerce strategy is now.

Social commerce also has a large market size. Facebook has reached an astronomical 2.6 billion monthly active users, and they claim that 70% of its shoppers look to Instagram for product discovery. Even on smaller social media sites such as Pinterest, the company reported that the average purchase on their site was over $50. Even small orders can carry a high order value for your business. With a large amount of native active users and a demographic that enjoys spending money, it’s clear that social commerce is alive and well in 2020.

Although buying on social media is a rising trend in the west, it has already become a societal norm in Asian countries such as China. For example, WeChat has integrated a highly successful shopping functionality into its app for years now. With their ‘app within an app’ framework, many of WeChat’s one billion users have grown accustomed to making payments within and through the app. In other nations, the divide between social media and sales will continue to fade, and purchases made through social media apps will only continue to increase.

How to Implement A Winning Social Commerce Strategy

At this point, you should have a good understanding of the importance of social commerce to your business. With that in mind, here are our top recommendations for anyone looking to get started in the world of social commerce.

1. Understand your market: Knowing which social channel to focus on is one of the first steps to creating a powerful social commerce strategy. Is your target audience older or younger? Is your target audience more likely to respond to events or promotional material? Answering these questions will help you narrow down which social media platforms are best suited for your strategy.

2. Adapt to new data: When it comes to social commerce, you have a much larger pool of data to work with. Reading comments, responding to questions, and changing how you display new products will improve your conversion rate dramatically. As with any business, listening to your customers is crucial, but it can be especially important in social channels where word of mouth can make or break your business.

3. Encourage user-uploaded content: Content that is uploaded by followers of your brand is viewed as the most organic and trustworthy. You can encourage users to post more content by investing in influencer campaigns or setting up giveaways that reward followers posting content with your product. The authenticity of seeing your product through customer-curated content, rather than in a manufactured photoshoot, will improve your sales.

4. Encourage purchases with fewer clicks: When you are creating content to improve sales, always use the native shopping functionalities of the social media app you are using. If you are creating content for Instagram, be sure that you tag the actual product in each photo where the product is present. This will allow users to tap and learn more in the simplest way possible. If you force users to search up your product after seeing it, you lose out on a percentage of customers who are simply too lazy to put in the extra effort past your landing pages. If you are planning out a social commerce strategy, you should look to take advantage of any functionality that lowers the obstacles preventing the customer from making a purchase.

5. Improve customer loyalty: Sales are important to any business, but cultivating a devoted following is much more valuable. Brands that are always pushing a product and aren’t being relatable will inevitably face backlash. Instead, focus on producing content that your consumers will enjoy and engage with. By doing so, you may have to create a few blog posts or photos that will have no impact on sales in the short-term. However, brands that have a dual strategy of short-term and long-term planning are the brands that foster customer loyalty and longevity.

We are a team of digital marketing mavens who live and breathe all things social media. We don’t post part-time. We don’t juggle jobs. This isn’t a passion project to generate a few bucks. And if we’re being honest, we work far harder than we play. For us, social media is life. We see the world through hashtags, filters, and killer content; and we wouldnt have it any other way. As a full-service social media and digital advertising agency, we’ve mastered the intricacies of everything from Facebook to Snapchat and the plethora of social media platforms in between.
PrevPreviousHow To Leverage LinkedIn for B2B Sales Leads and Recruiting
NextInstagram Feed vs Instagram StoriesNext
Copy link
CopyCopied
Powered by Social Snap